The Channel Upgrade will be delivered over a period of six years from 2018 to 2023. Under the delivery schedule, it will create 120 Full Time Equivalent (FTE) jobs in Townsville during construction and support 245 FTE jobs in Queensland.

Several principles were established to guide the procurement and delivery methodology for the project including:

The Channel Upgrade project will take about five years in total. The first year will be preparation works, followed by rock supply and construction of the rock wall. Capital dredging for channel widening and filling of the reclamation area will complete the project. 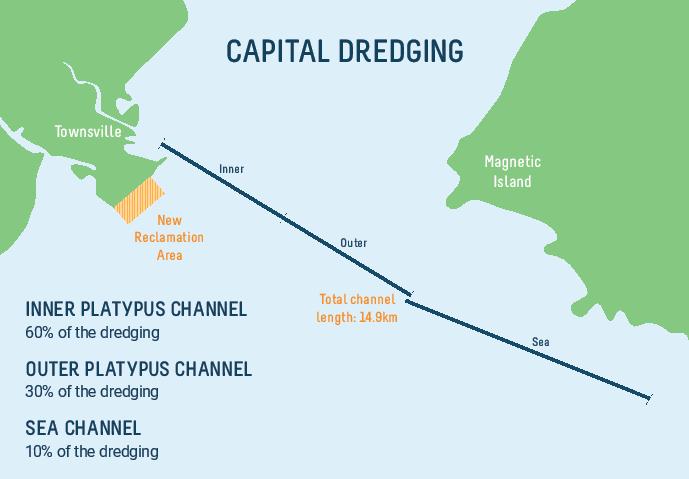 Over approximately 20 months, local suppliers will deliver more than 750,000 tonnes of rock to the Townsville Port for the Channel Upgrade project. The rock will be used to construct a 2.2 kilometre rock wall that will bund a 62 hectare port reclamation area.

In line with the Channel Upgrade project delivery model, haulage of rock for the construction of the rock wall began in the first half of 2019. The trucking route is along the Flinders Highway from third-party quarries west of Townsville, then along the Port Access Road (South Port Road) to the Port of Townsville. This route minimises disturbance for local residents.

Rocks are being delivered to the Port during daylight hours Monday to Saturday over a 20-month period. No rock haulage occurs on Sundays. 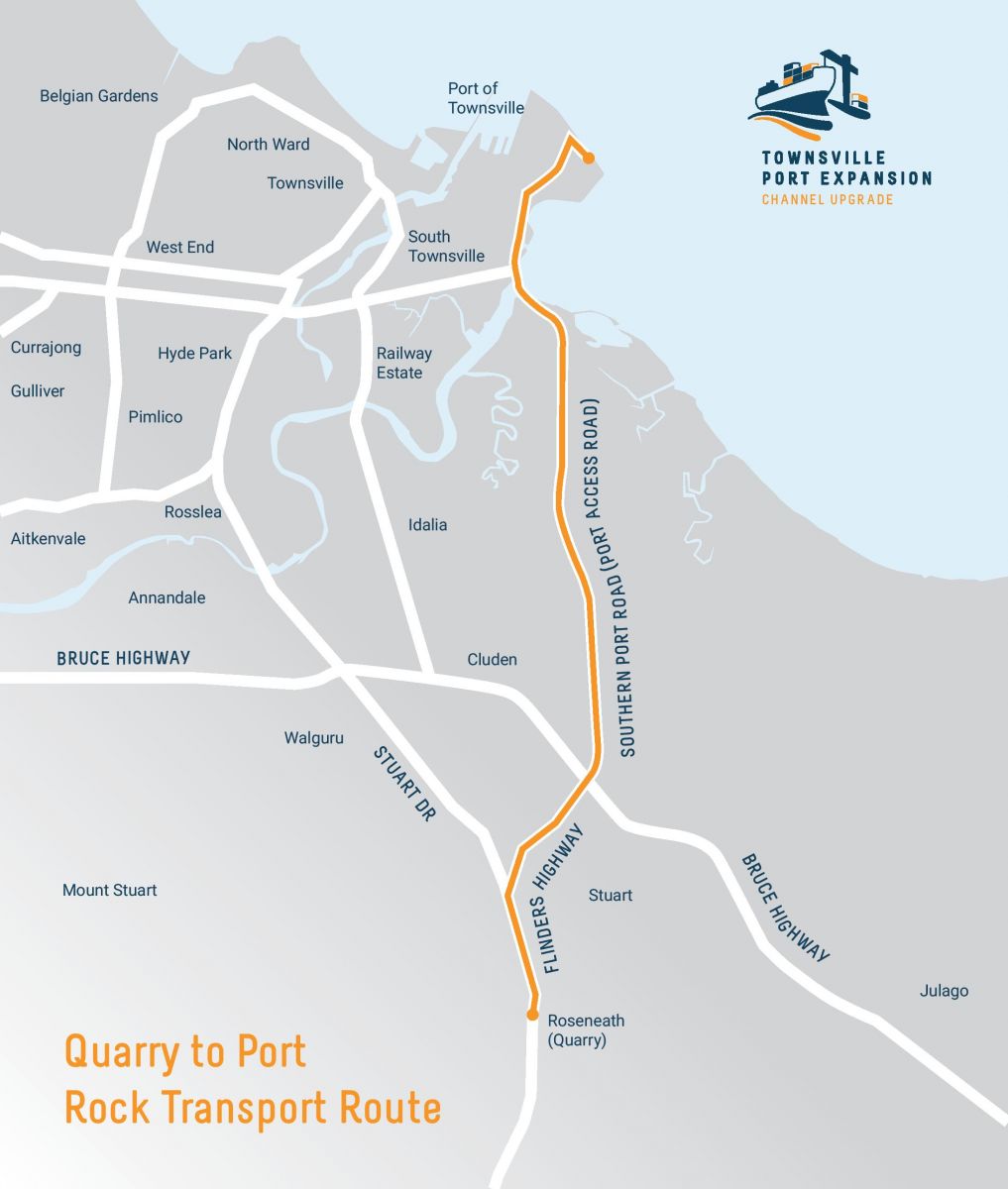 Before capital dredging begins, a new rock wall is being constructed to the North of the existing East Port, at the mouth of Ross River.

The rock wall measures approximately 550m along the Eastern and Western bunds and 1100m across the connecting Northern bund. When complete, the rock wall will comprise four different types of rock material: primary armour, secondary armour, core rock and ballast rock; and weigh approximately 750,000 tonnes. The design incorporates a finely woven geotextile material along the entire inner face of the wall, which will keep sediment and dredge material from passing through the wall during construction. This design is based on a similar rock wall at the Port of Townsville, which has successfully weathered Cyclone Yasi and other storm surges.

The rock wall will be constructed in three stages. First, the rock core material is installed to form the base of the wall. The core rocks are small, weighing under 400kg each. Next, large excavators will be used to place the secondary armour on the wall. The secondary rocks are much larger than the core rocks, weighing up to 1.1 tonnes each, and help protect the core from wave action. On top of the secondary armour, comes the primary armour made of the largest and toughest rocks, with each rock weighing up to 8 tonnes.

The geotextile layer will be interlaced through the rock layers during construction. This will be positioned inside the rock wall and will act as a filter layer to stop the capital dredge material and small rocks from passing through the wall. The geotextile will be sandwiched between two layers of the fourth and final rock type, a very small rock called ballast, which will provide a protective cushioning layer to hold the geotextile in place and ensure it is not damaged by the larger rocks.

The Port of Townsville and all contractors engaged for the rock wall construction are committed to ensuring the project complies with very strict environmental approval requirements and are undertaking numerous programs to monitor and protect the surrounding marine environment, including the monitoring of:

While the rock wall will not affect speed limits of vessels travelling in and out of Ross River an exclusion zone is in place for the construction area.

During rock wall construction and channel widening, lights and buoys will mark safety and exclusion zones. A traffic management plan will be devised for vessels when channel widening is occurring.

Capital dredging will be carried out using a mechanical dredge. A mechanical dredge is an excavator (like you would see on a land-based building site) that sits on top of a barge. The mechanical dredge will dig material from the sea bed and place it onto a waiting barge for transport to the port reclamation area to the east of the Port.

In some circumstances a mechanical dredge may be slower than other types of dredgers, however, it provides the best environmental outcomes for Cleveland Bay. 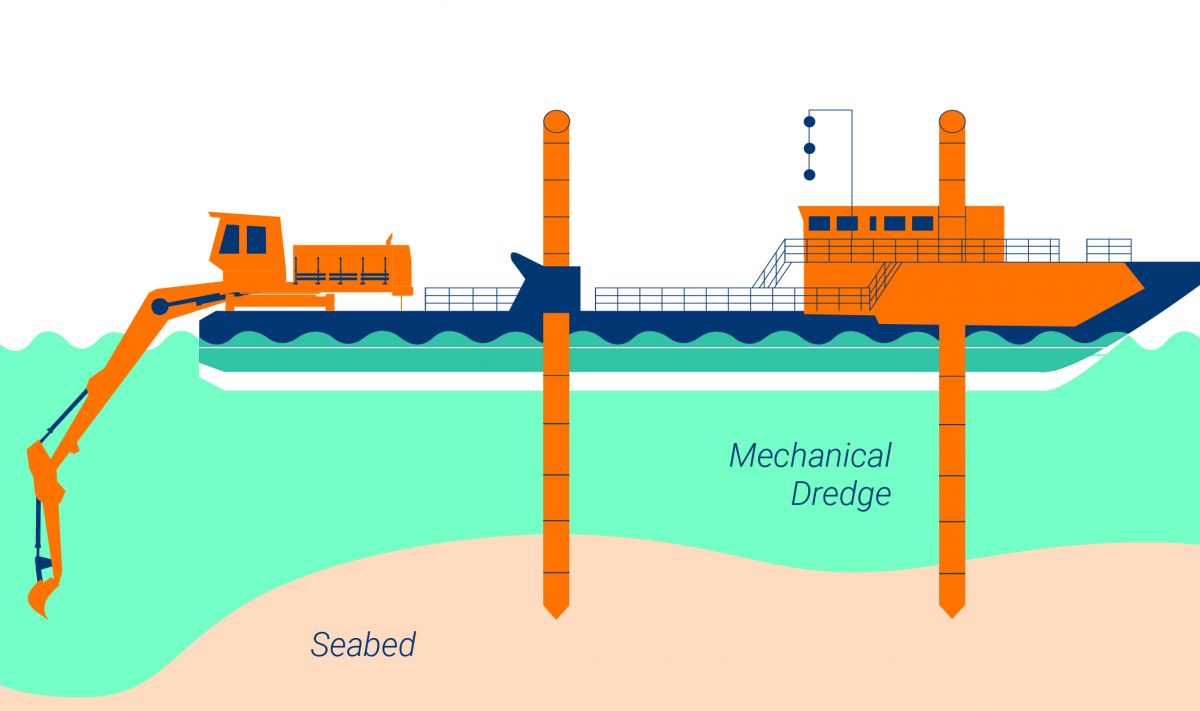 The port reclamation area will create more land for the Port of Townsville’s future developments and significantly improve the Port’s capacity to meet forecast trade demand over the next 30 years.

The 62 hectare area, bunded by the new rock wall, will ensure all dredge material from the channel widening will be beneficially reused. This reuse of capital dredge material is in accordance with the Sustainable Ports Development Act 2015 and UNESCO Reef 2050 commitments.

Completion of the port reclamation area is the final stage of the Channel Upgrade project and is due for completion in 2023.

The Port of Townsville has developed a Community and Stakeholder Engagement Plan (CSEP) to ensure that people who live, work, visit or operate near the Port are kept informed about the Channel Upgrade project. The CSEP also invites community members and stakeholders to contribute to relevant proposals or policy changes through various consultation activities.

For general enquiries about the Port of Townsville