Rowes Bay beach will be replenished using sand from the mouth of the Ross River as part of Council’s annual beach renourishment works. The work is based on the recommendations of the Rowes Bay Shoreline Erosion Management Plan and is expected to take 7 to 8 weeks to complete. Community Safety and Environment Committee Chair Cr Margie Ryder said the sand transfer was important for repairing erosion to the beach. “This work is part of an annual program that will replenish sand along 800m of the foreshore between Mundy Creek and the Rowes Bay wind turbine,” Cr Ryder said. “Council undertakes these works annually as part of our Rowes Bay Shoreline Erosion Management Plan to minimise the effect of erosion on Rowes Bay.” The Port of Townsville is providing 5,000 cubic meters of sand from the Ross River for the project. Port of Townsville Infrastructure and Environment General Manager, Marissa Wise said that it is pleasing to see the long-term partnership between the Port and Townsville City Council contributing to providing the community with an enriched beach by using replacement sand. “The Port removes the sand from Ross River and Cleveland Bay to improve safety for the multitude of private, commercial, research and military vessels that use the Ross River for access to and from Cleveland Bay,” Ms Wise said. “The Port is delighted that we are able to contribute to the local community by providing this sand to Townsville City Council as it also helps the Port achieve its goal of increasing the beneficial reuse of the sand.” The annual works will be expanded this year with funding of $735,000 provided under the Disaster Relief Funding Arrangements (DRFA) as part of the recovery from the unprecedented monsoon event last year. These extra works will use coarser sand – transferred from upper sections of Ross River – to mix with the fine sand provided by the port. Local Councillor Ann-Maree Greaney thanked residents for their patience while the work is completed. “Erosion management at Rowes Bay is vital for keeping the foreshore in good condition,” Cr Greaney said. “While this work is underway there will be partial closures to the beach, but this work will allow us to keep the beach open and looking great for residents in the longer term.” https://www.townsville.qld.gov.au/about-council/news-and-publications/media-releases/2020/may/rowes-bay-beach-sand-replenishment-underway 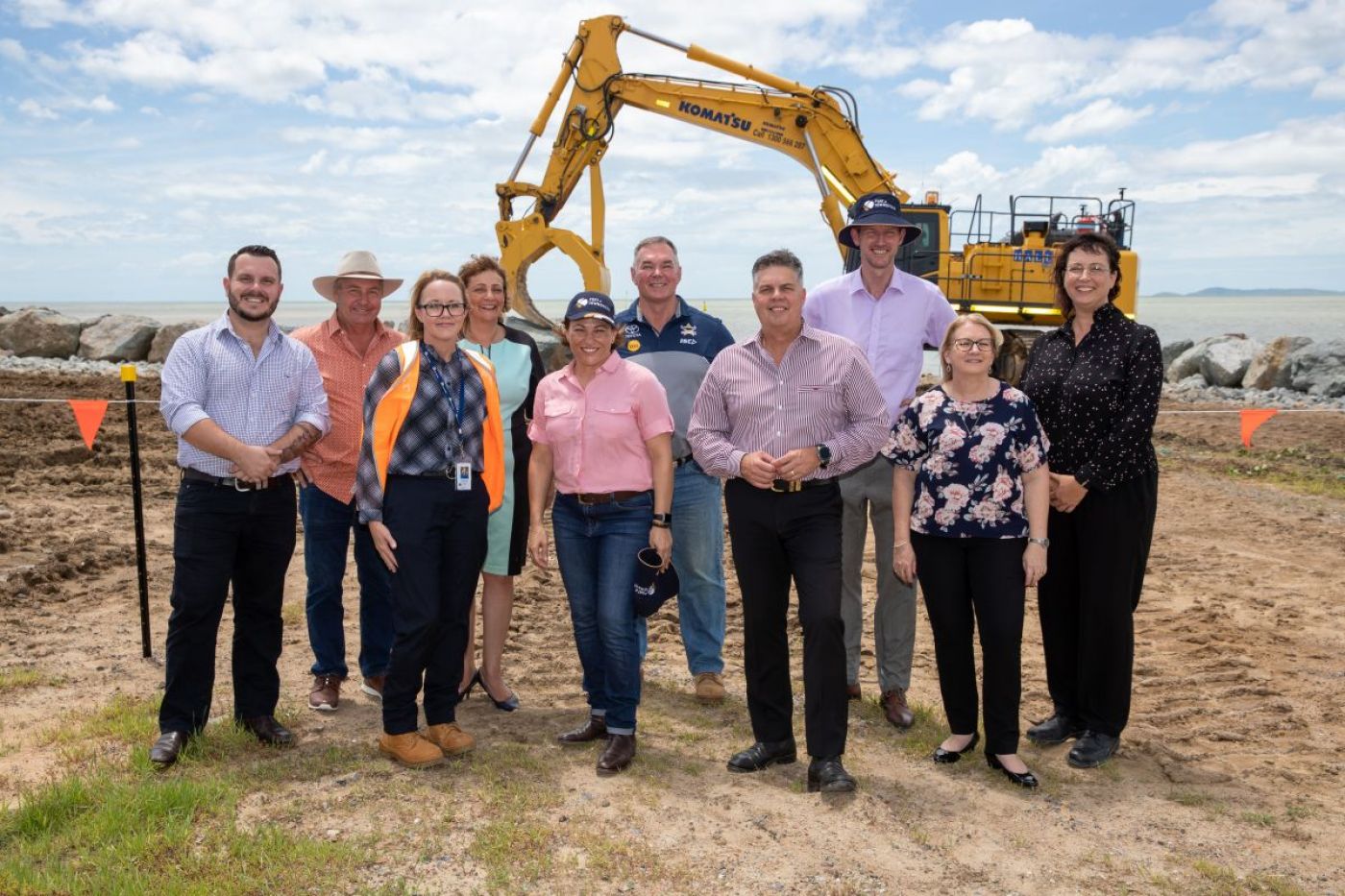 Townsville’s $193 million port upgrade is underway with the first rocks laid this month for its new protective wall. Construction is already moving ahead on the 2.2km protective rock wall, which will ultimately pave the way for up to six new berths. Federal Minister for Population, Cities and Urban Infrastructure Alan Tudge said the upgrade would be the Port’s largest ever expansion in its 156-year history. “It means cruise and commercial vessels up to 300 metres in length will be able to safely access the Port of Townsville,” Mr Tudge said. “It’s a massive change that will generate jobs and boost the local economy.” Queensland Deputy Premier and Treasurer Jackie Trad said the upgrade would provide a significant boost for jobs and the North Queensland economy, allowing cruise and commercial vessels up to 300 metres long to safely access the port. “This is the biggest change to the port in almost 30 years and is one that will support jobs in Townsville for decades to come,” Ms Trad said. “More than 70 port staff, rock supply and rock wall construction employees will be involved in the rock wall construction phase, joining more than 3,200 Townsville jobs created by the Queensland Government as part of its $930.7 million budget for the region.” Transport and Main Roads Minister Mark Bailey said the Port of Townsville is the gateway for projects as far away as Mount Isa and this investment will ensure the entire North Queensland economy can benefit now and into the future. “We’ve seen trade at the port increase 4.7 per cent with 7.68 million tonnes of freight going through its gates, alongside 16 cruise ships visited the city bringing with them 20,000 visitors,” Mr Bailey said. “It’s why the Queensland Government is investing in a $193 million upgrade of the port channel, $40 million Berth 4 upgrade and $48 million intermodal facility.” Member for Herbert Phillip Thompson said he was pleased to see the Australian Government’s $75 million investment delivering results. “The sooner the rock wall is built, the sooner we can dredge the channel, and start seeing more and bigger ships using our Port,” he said. “That will only mean more freight coming in and out, and ultimately more money being injected into Townsville’s economy.” State Member for Townsville Scott Stewart said the port is a critical regional hub that drives economic growth, generates jobs, and plays a significant role in Australia's defence capabilities. “It’s great to see the contractor recruiting locally to help lay at least 600,000 tonnes of rock,” Mr Stewart said. “When the port is strong, our city is strong. “Holcim has put on more workers to meet the contract from its Roseneath quarry, while HY-TEC also has a contract to supply rock from its quarry at Calcium.” The new rock wall will take about 12 months to complete, extending approximately 550 metres seaward, with the northern side about 1.1km in length.  It will form a protective bund around a 62-hectare reclamation area that will kickstart the Port’s seaward expansion, with construction occurring Monday to Saturday during daylight hours. Port of Townsville CEO Ranee Crosby said today’s event was an important one for the project, which is a key initiative under the landmark City Deal between the Federal, State and Local Governments. “We are immensely proud of the more than 70 Port staff, contractors and specialist advisors that have made this happen. This rock wall construction is the first major change to the Port’s physical footprint in almost three decades,” Ms Crosby said. The Townsville Channel Upgrade is a joint project of the Queensland and Australian governments, and Port of Townsville Limited.  The Channel Upgrade forms part of the Townsville City Deal signed in December 2016. Queensland Government Joint Statement 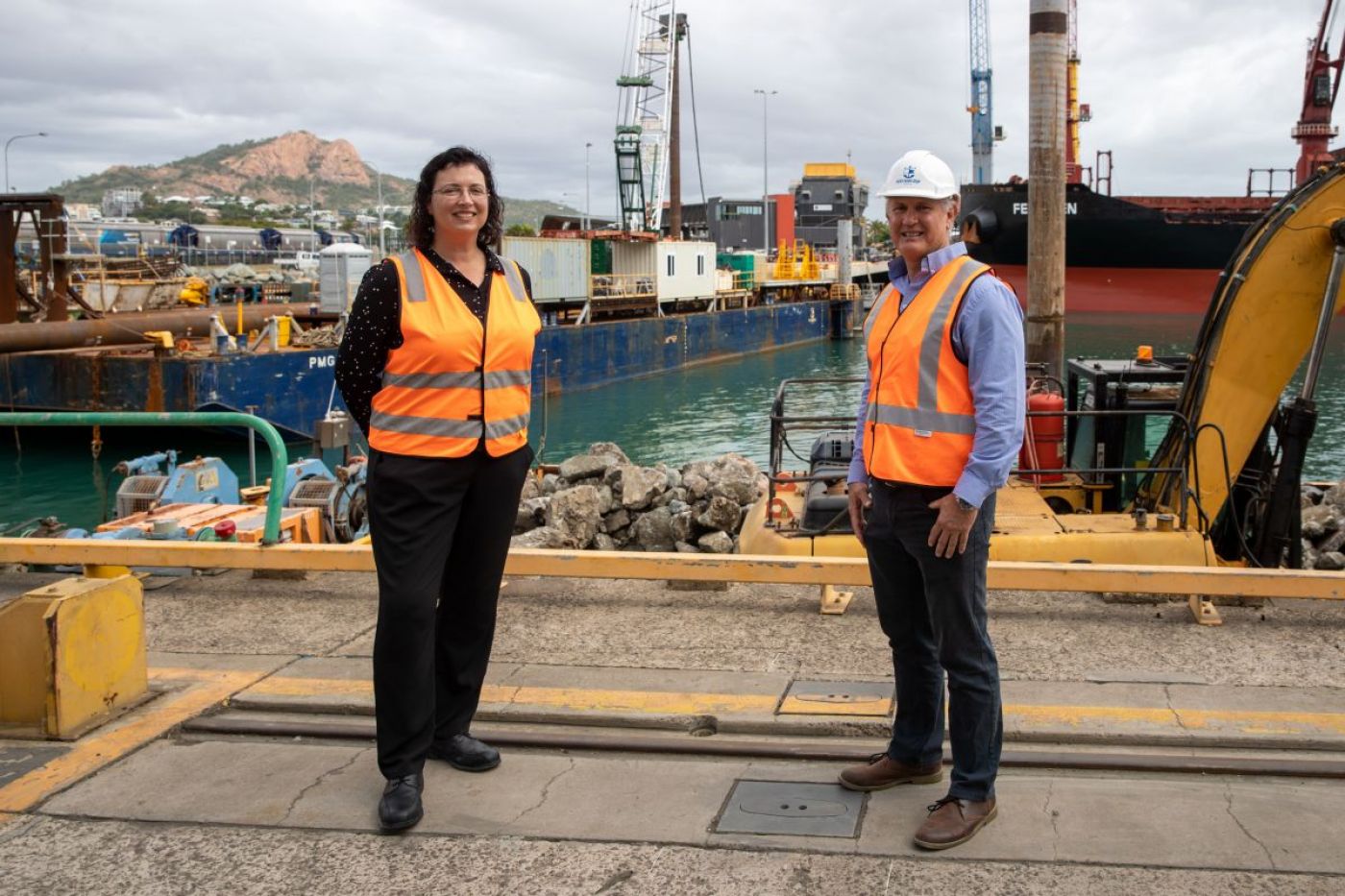 A new $2.5 million project to extend the secondary wharf at Berth 10 will make Townsville more attractive for car carriers, while also providing a much-needed boost to jobs and the local economy. Townsville marine contractor Pacific Marine Group Pty Ltd (PMG) was successful in securing the contract to upgrade the important Roll on Roll off (RoRo) wharf extension for larger car vessels.  This work will support up to 26 jobs on-site including sub-contractors. Port of Townsville General Manager Infrastructure and Environment Marissa Wise said the wharf was currently too short to cater for car carriers with a 38m beam or width as larger car carriers of this size are becoming the norm across the globe. ``This gives Townsville the opportunity to grow car import numbers.  We are currently importing around 15,000 cars annually.  The upgrade will provide an opportunity for more vessels to unload in Townsville, reducing supply chain costs for North Queenslanders,’’ she said. ``It’s important to be putting money into our economy at any time but especially under the current circumstances.  The Port has a long history of utilising local contractors, and having the expertise of Townsville-based business Pacific Marine Group is ideal for this type of project.’’ Pacific Marine Group CEO Kevin Chard said the project couldn’t have come at a better time. ``This is really timely for PMG as we have had to demobilise from various projects in PNG and the Pacific due to travel restrictions related to the COVID-19 pandemic. Generally marine construction work is subdued due to the pandemic travel restrictions,’’ he said. The project includes cutting into the existing wharf, fabrication and installation of steel piles and construction of a concrete wharf deck.  Once completed, the secondary wharf will have a 55-metre extension to accommodate the stern ramps of car carriers. Some of the works will be landside while the rest will be conducted from tug/barge/crane units. Work has begun and is due to be completed in August. The Berth 10 upgrade corresponds with the $193m Channel Upgrade project which is designed to allow bigger ships to enter Townsville from 2023.