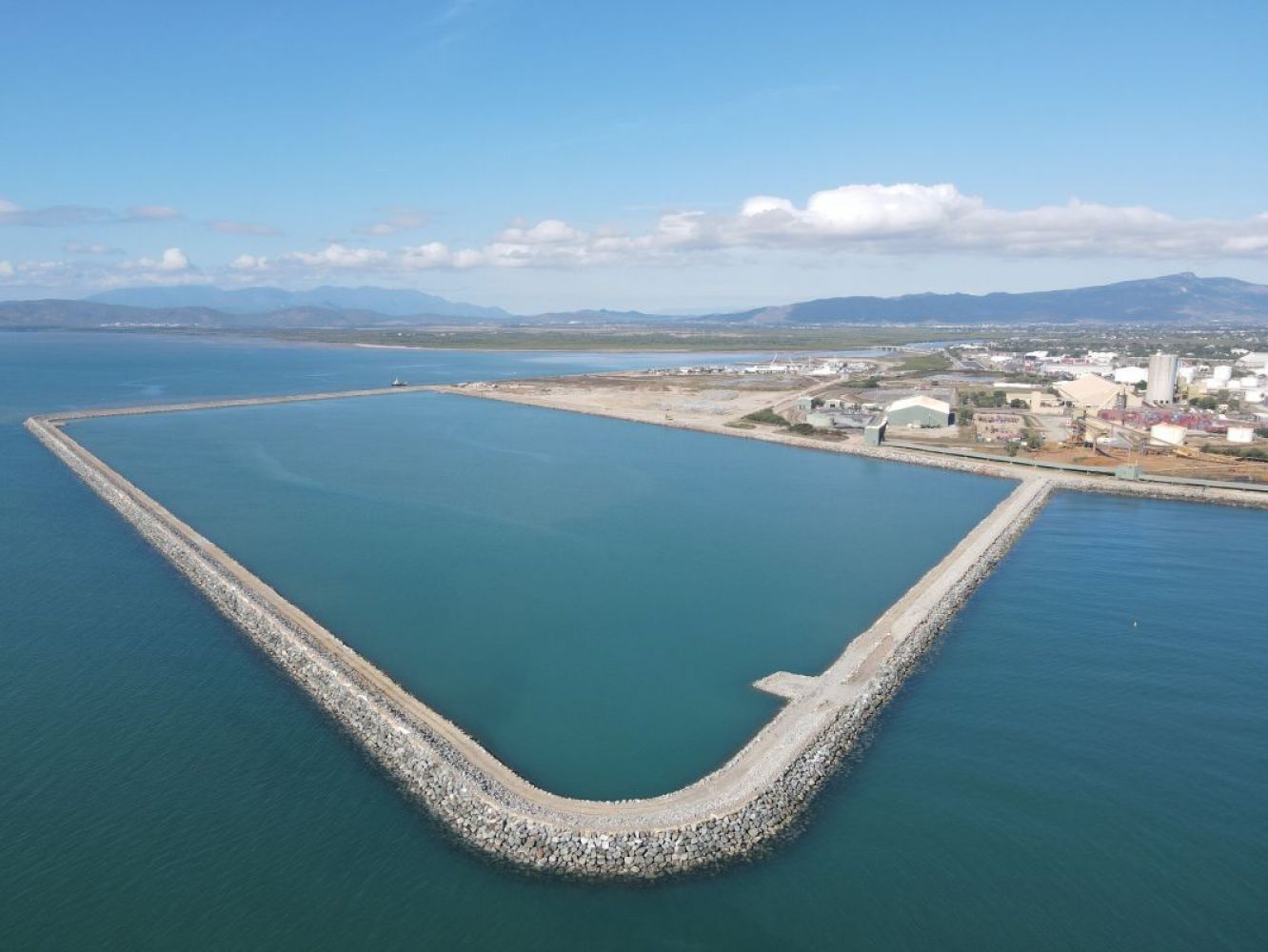 The largest infrastructure project in the Port of Townsville’s history has reached a major milestone with the completion of the $232 million Channel Upgrade project’s rock wall. Constructing the 2.2-kilometre rock wall is the first critical step in widening Townsville’s shipping channel to allow larger ships to access the Port instead of bypassing Townsville. The material recovered as the dredging team starts to widen almost 15 kilometres of sea channels over the next two years will be used to reclaim the area behind the wall and support a 62-hectare expansion. Minister for Communications, Urban Infrastructure, Cities and the Arts, the Hon Paul Fletcher MP, said the channel upgrade was a key project under the Townsville City Deal. “This is a major milestone in the channel upgrade project, which is not only the biggest infrastructure project ever undertaken at the Port of Townsville, but will help position Townsville as the economic gateway to Asia and Northern Australia,” Minister Fletcher said. “This project is one of many significant investments that we’re making through the City Deal, which is helping to generate local jobs, drive economic growth, and ensure that Townsville is a vibrant and liveable city for years to come.” Queensland Minister for Transport and Main Roads, the Hon Mark Bailey MP, said upgrading the port’s channels would support Queensland’s COVID-19 Economic Recovery Plan, unlocking capacity for commercial, defence and cruise ships up to 300 metres long. “We know that when the port is strong, close to 800,000 Queenslanders reap the benefits,” Minister Bailey said. “That’s why we’re investing in this largest-ever port upgrade, which is supporting local jobs and providing work to local suppliers now during construction and will expand the trading capacity of one of Queensland’s largest publicly-owned ports.” Federal Member for Herbert, Phillip Thompson MP, said the project was critical to enabling the city to reach its full potential. “This is the largest port in Northern Australia but there’s still room for growth, so that’s why we’ve invested in this project,” Mr Thompson said. “This is a great example of what the City Deal can achieve when all levels of government work together – not only investing in critical infrastructure to unlock our economic potential, but also creating jobs for locals in the process. Queensland Resources Minister and State Member for Townsville, the Hon Scott Stewart MP, said the Channel Upgrade would support jobs in the Townsville region, providing local opportunities during North Queensland’s economic recovery. “The project has so far provided employment to more than 1,300 people since 2018, when design work started,” Mr Stewart said. “Expanding the Port of Townsville’s footprint builds capacity for our resources sector to export more to the world through our pit to port approach, which involves upgrading the Mt Isa to Townsville rail line too. “The resources sector plays a vital role in supporting jobs across the state and it will be a key part of Queensland’s plan for economic recovery from COVID-19. “More exports means more royalties, and more jobs for Queenslanders.” Port of Townsville Chief Infrastructure Officer, Marissa Wise, said seven local rock suppliers provided 900,000 tonnes of rock, with construction of the 10-metre-high wall requiring specialist knowledge. “It was a complex project that called on the marine construction expertise of designers, engineers, environmental experts and contractors working together,” Ms Wise said. “We have used a number of innovative design and construction techniques to ensure the rock wall withstands tidal action, storm surges, cyclones and rising sea levels.” Of the more than 1,300 people employed by the project since 2018, over 90 per cent were Queenslanders, 10 per cent First Nations people and more than 6 per cent trainees and apprentices.  During the peak construction phase of the rock wall there were 200 trucks passing through the site gates every day to deliver over 20,000 tonnes of rock a week. Dredging to widen Townsville’s 14.9-kilometre shipping channel will commence shortly, with all dredge material to be placed in a 62-hectare reclamation area bounded by the rock wall. Dredging is expected to take two years, with the project set for completion in late 2023. The Port has committed $17 million for environmental monitoring and management programs as part of the project, including those covering dolphins, turtles, seagrass, coral and shorebirds, with an Independent Technical Advisory Committee providing expert oversight. The Channel Upgrade project is the largest infrastructure project in the Townsville Port’s history and is the first stage of the 30-year Port Expansion Project. The Townsville Port Channel Upgrade is a joint project of the Australian and Queensland governments, and Port of Townsville Limited, and forms part of the Townsville City Deal signed in December 2016. Additional information The shipping channel will be widened from 92 metres to 180 metres at the Port end, and taper to 120 metres at the seaward end, The wider shipping channel will allow vessels up to 300 metres to safely access the Port, Best practice dredging methods will ensure minimal environmental impact, All capital dredge material will be transported to land for beneficial reuse in a 62-hectare reclamation area, bounded by the rock wall, The area will allow the Port to expand its footprint in the future and ultimately pave the way for up to six new berths, and Trade volumes through the Port of Townsville are expected to triple over the next 30 years. 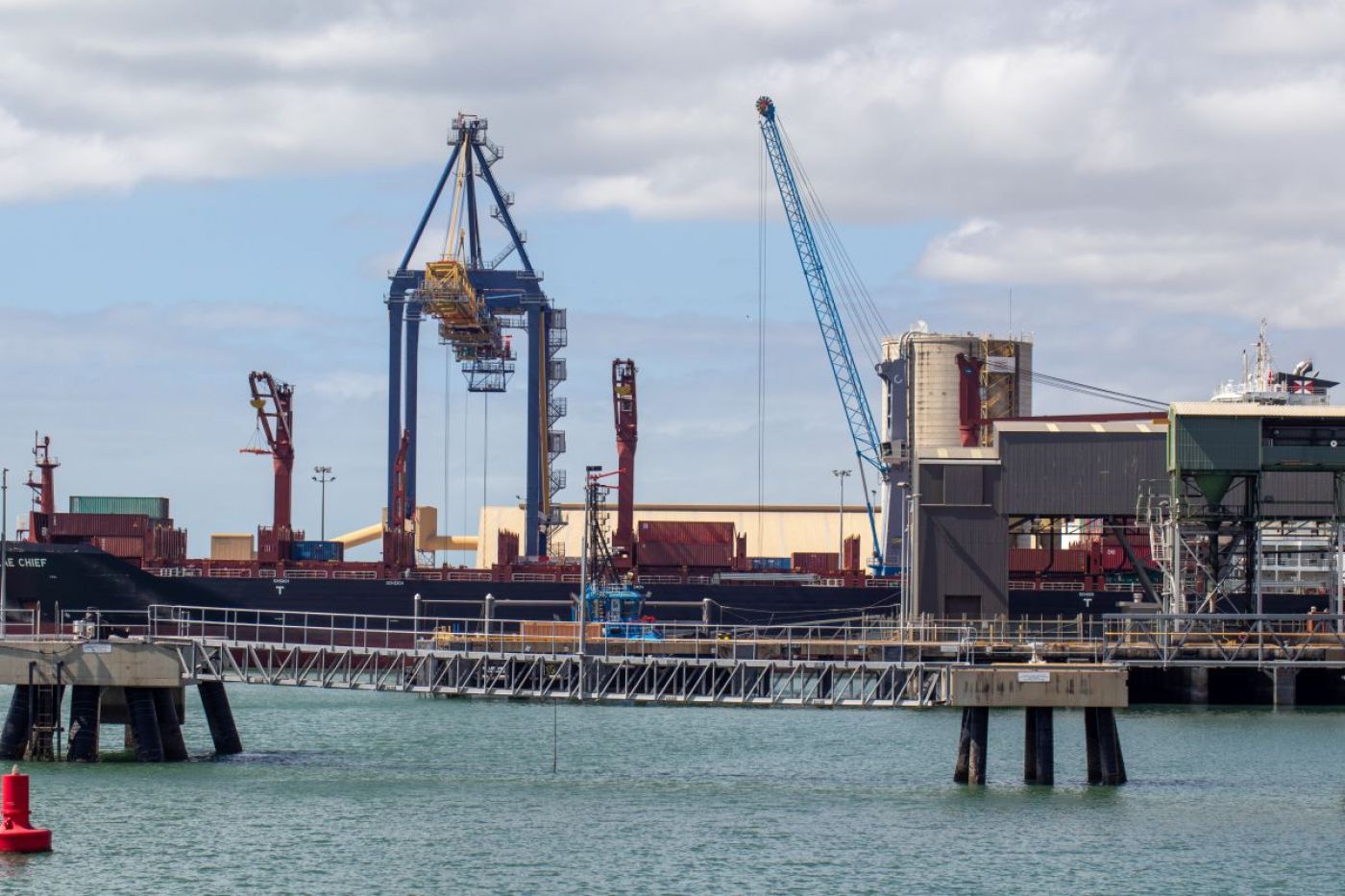 The loading and unloading of container vessels at the Port of Townsville has been supercharged with the official commissioning of a new $30 million Berth 4 Crane and Cargo Terminal. The Terminal’s completion has been marked by the debut of the Port’s new Liebherr Post Panamax Ship-to-Shore crane. Transport and Main Roads Minister Mark Bailey said the crane will comfortably double the operational speeds of its predecessor. “The new Crane and Cargo Terminal is able to unload vessels at a rate of 35 twenty-foot equivalent containers per hour,” Mr Bailey said. “Combined with the $40.7 million Berth 4 wharf upgrade completed in 2018, it’s more than doubled the berth’s overall handling capacity. “The crane’s faster lift rates also mean faster turn-around times for vessels – a key indicator of any port’s efficiency and trade competitiveness.” Mr Bailey said more than 150 full-time jobs for locals have been supported by the upgrades to Berth 4, as part of the Palaszczuk Government’s economic recovery plan. Minister for Resources and Member for Townsville Scott Stewart said the Port of Townsville plays a vital role in moving day-to-day products to more than 800,000 people across North Queensland. “With demand for containerised goods expected to grow four-fold over the next 30 years, it is crucial that we find ways to keep pace,” Mr Stewart said. “We expect boosted productivity to attract more regular shipping services to Townsville and to help sustain growth in containerised goods and other cargo well into the future.  “The Port of Townsville is also a crucial link for the resources industry to get its product to market. “We are also looking to support a new intra-state coastal shipping service between Townsville and Brisbane as part of our $21 million maritime jobs commitment. “The Palaszczuk Government will be looking to this group for recommendations regarding next steps on the expressions of interest for the new coastal shipping service and the switching of crews to a local workforce, as well as the structure for the training and cadetship support that will be a condition of payment of incentives to any successful proponents.” Member for Thuringowa Aaron Harper said the upgrades formed part of a whole-of-supply chain approach to improving efficiencies and preparing for significant trade growth over the coming decades. “We’re also delivering the $232 million Townsville Channel Capacity Upgrade project which is now underway,” Mr Harper said. “Currently, the channel can accommodate vessels up to 238 metres in length and the widening of the channel will allow it to accommodate vessels up to 300 metres in length.” Member for Mundingburra Les Walker said the port would continue be a key part of Townsville’s future. “The Port of Townsville is important to the city’s economy, by providing both direct jobs but supporting many other industries,” Mr Walker said. “That’s why upgrades like this are important as they increase the capacity at the port. “It’s the Palaszczuk Government that will continue to back and invest in key assets like the Port of Townsville because we know how important they are for all of Queensland.” Port of Townsville Chief Operating Officer Drew Penny said the Port of Townsville expects to handle the equivalent of more than 200,000 twenty-foot containers per year by 2050. “Containerised goods are one of the key growth areas we have identified for the Port, and the new crane will be an important player in helping us ready for that additional trade,” Mr Penny said. “We doubled the general handling capacity of Berth 4 when it was upgraded in 2018 and now the Crane and Cargo Terminal delivers significant productivity improvements and greater capability for containers. “The crane also complements the Port of Townsville’s future plans as it readies to welcome vessels up to 300m long following completion of the Channel Upgrade project in 2023.” Construction of the Berth 4 Crane and Cargo Terminal included: Construction of pavement for heavy cargo handling over a 1.8 hectare site Construction of a quarantine-approved container wash bay Installation of power, lighting, fencing, terminal gates, amenities and utility services Road and rail level crossing for direct access to Berth 4 from the cargo terminal site Supply, assembly and installation of the Liebherr Post Panamax Ship-to-Shore crane.